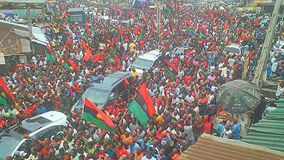 IPOB and their leader Nnamdi Kanu is in a massive rally today being Sunday,  20 August 2017 at Ekwulobia,  Anambra state. Not minding the warning Anambra state government gave him and IPOB members not to enter Anambra state for their rally’s,  but he is fearless.

According to Ogochukwu Nnanna, reporter direct from the rally ground.

“IPOB and her indefatigable leader Mazi Nnamdi Kanu took the Bull by its horn after the threat by Willie Obiano and his Hausa Fulani Nigeria military to disrupt the gathering that was scheduled to hold today following the previous shooting on the 16th of August, when IPOB proposed to hold the rally. The governor of Anambra state in collaboration with the Nigerian military warned IPOB to stay clear from the state and shun the idea of holding any rally in Ekwulobia, but IPOB as popularly known does not succumb to threats and has remained resolute and fearless in this quest of Biafra restoration.”

“However, irrespective of those threats and warnings the gathering still held today with millions of Biafrans in attendance. To crown it all, the arrowhead of this movement Mazi Nnamdi kanu arrived the event ground fearlessly and determined with great number of Biafrans.”
The entire Ekwulobia indigenes stood still and gave our leader a kingship and honorably welcome. I must confess, today’s event is the mother of all IPOB gathering so far witnessed since the campaign and awareness for the boycott of every election in Biafraland as directed by the leadership of IPOB.”

“Biafrans of all ages, men, women and children came out in their millions to stand in solidarity with our leader Mazi Nnamdi Kanu. Biafrans have been sacrificing a lot to honour every rally called by Mazi Nnamdi Kanu, unlike what is obtainable in Nigeria, where politicians pay huge amount of money to mobilise people to honour their call for any gathering but Mazi Nnamdi Kanu paid nothing to Biafrans to answer his calls for a gathering or rally not minding the distance or risks involved, yet they would come out in their millions to honour him. This is because he is a true leader who is embedded with honesty and truth and is always ready and disposed to telling his followers absolute truth without minding who it hurts.”

“To Biafrans, the leader they have been longing for, they have seen in Mazi Nnamdi Kanu and they are ever ready to make all necessary sacrifice in making sure he gets the needed support to restore Biafra. Mazi Nnamdi kanu is a leader who stands by his words, he has never failed his people and has no intention of failing them.” 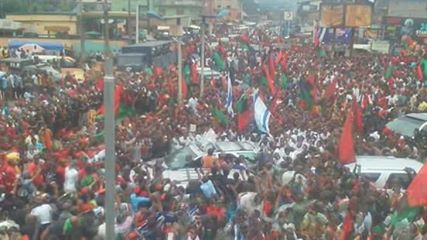 “However, based on the lies that the channel TV has been peddling against our leader Mazi Nnamdi kanu, that he has lifted the ban on the boycott of Anambra state election during the meeting he had with the self- styled Igbo leaders, I can tell you that today at EKWULOBIA, Nnamdi kanu has reiterated his stance again and again that election will not hold in Anambra state come 18th November, 2017.”
Mazi Nnamdi Kanu, the leader of Indigenous People Of Biafra (IPOB) was live and direct in EKWULOBIA, Anambra state today 20th day of August, 2017 and he has said it to the hearing of the whole world that his stance on the boycott of Anambra state election remains unchanged and uncontestable.”
“He maintained that unless a date for referendum is given, Biafrans are not going to participate in any Nigerian election again and the indigenes of Ekwulobia were  there today to also say that they are in support of “No election in Anambra” till a date for Biafra referendum is given.”
It was on this backdrop that we all agreed that anybody who comes out to vote on the day of Anambra governorship election will have him/herself to blame.

I am not sponsoring Niger Delta Avengers- Goodluck Jonathan

A woman slash the hand of her 13-year-old, housemaid

3 died, 20 wounded as soldiers reportedly in a shoot out at Nnamdi Kanu's home